The Royal Chapel features examples of architecture, décor and artworks by some of the leading masters of their times: Nikodemus Tessin the Younger, Carl Hårleman and Georg Haupt.

Ever since the time of Magnus Ladulås in the 1200s there has not only been a chapel at the Royal Palace of Stockholm but also a clergy.

The present Royal Chapel is the third chapel in the palace grounds that we have detailed information about. Karl XI's newly inaugurated chapel was burnt down in the great fire of May 7, 1697.

Constructing a new Royal Chapel was a key part of architect Nikodemus Tessin's extensive commission to build a new palace after the fire.

Carl Hårleman completed the chapel's interior in the middle of the 1700s, to a large part following Tessin the Younger´s drawings. Sculptures, statues and ceiling paintings have been carried out by the foremost craftsmen of the period.

The Royal Parish's members consist of the employees of the Royal Court and their families. Every Sunday mass is held where naturally everyone is welcome.

The Royal Chapel is also open during the summer month and in connection with organ and classical music concerts. 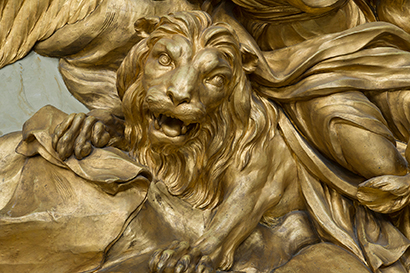 Close-up of the lion on the pulpit. 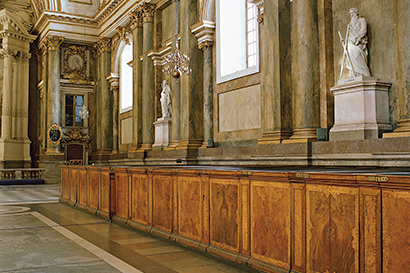 The pew doors in the Royal Chapel were made by Georg Haupt and came from King Karl XI's palace chapel, having been saved from the fire.

The Swedish Regalia are kept in the cellar vaults of the Royal Palace of Stockholm. Here you can see crowns used by kings, queens, prince...

Join our knowledgeable guides for a tour through the state rooms at the Royal Palace of Stockholm. During the tour, history will be broug...

Bring your children and grandchildren to the Royal Palace's state rooms during the Christmas holidays. We need your help looking for elve...

The Thinking Hand is a scholarship competition for young draftsmen, an annual collaboration between the Royal Court and the Royal Acade...

Read more
The artwork Gaia at the Royal Palace

The Royal Palace is taking part in the Nobel Week Lights festival, which will light up Stockholm between 3 and 11 December 2022. The artw...

Tickets
Caring for history and future

In the Royal collections there are two bureaus made by Christian Linning, one of the leading Rococo cabinetmakers in Sweden. These commod...